The Inheritors are still hunting Spideys from across the multiverse, and this week, they’ve got their eye on one in particular – Spider-Gwen! Unfortunately, there’s no time for Peter Parker to wrap his mind around the fact that Gwen Stacy has spider powers, as Morlun is on her tail! Get ready for a brawl to end it all as you rescue this great new hero and bring her into our dimension.

Who is Spider-Gwen, you might ask?
In our dimension, Gwen Stacy was Peter Parker’s first love who was tragically killed by the Green Goblin, but in an alternate dimension, it was actually Gwen Stacy who was bitten by the radioactive Spider, acquiring powers of her own! After gaining her powers, she assumed the identity of Spider-Woman and began fighting crime, which unfortunately brought her into conflict with Peter Parker, who, in an attempt to get revenge on those who had bullied him, transformed himself into the Lizard! Peter died during his battle with Spider-Gwen as a result of the chemicals he had used to transform himself, but she was the one who ended up taking the blame. A fugitive ever since, she did her best to continue her crusade for justice until being recruited by Spider-UK to join with the other Spider heroes in the fight against the Inheritors.

Here's the scoop on the new Spider-Verse prelude event:

Boss Event: “Morlun Unleashed”
Date: November 13th – 18th
Details: Morlun is making a special appearance. Fight against him as you compete for the highest score to win Spider-Gwen – the newest legendary character!
Tip: Tag-team with Spider-Armor for a huge score bonus. Plus, defeat Morlun enough times to earn the new Epic Spider-Armor. 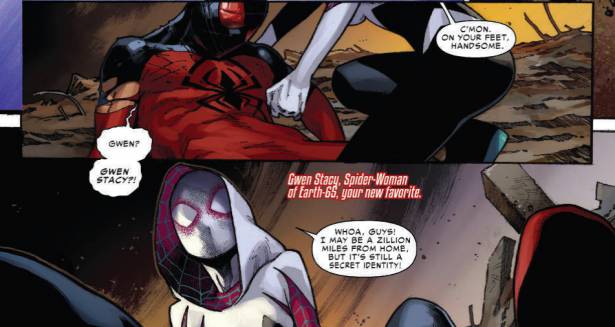